On and off for the past couple of years, my friend Ray and I have been working through the Cryptopals Crypto Challenges, a series of exercises split across eight sets that explore modern cryptographic protocols and their weaknesses. The challenges start out pretty easy, but as you move forward, the attacks you’re asked to implement become increasingly difficult.

This post is about challenge 55, “MD4 Collisions.” In it, you’re asked to implement Wang’s 2004 attack on the MD4 hash function. The attack itself is pretty difficult: as far as Ray and I can tell, no one has posted a solution to it online. (There is this code from Bishop Fox, but it consists solely of a dense, 500-line, uncommented C program).

After several days of work, our script finally spit out a brand new collision: 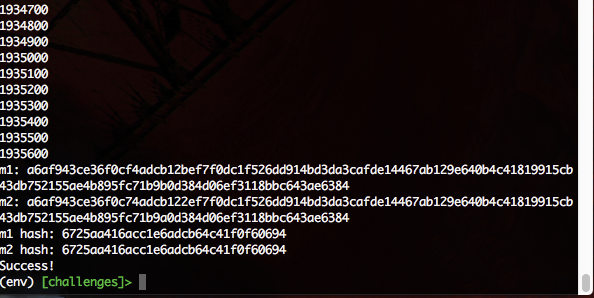 In this post we’ll talk about the attack and our implementation in detail.

MD4 was invented by Ron Rivest in 1990, back when no one really knew how to design cryptographically-secure hash functions. It uses a 128-bit message digest, meaning that its internal state and the hash that it outputs is 128 bits, or 16 bytes. Internally, MD4 treats this state as four 32-bit integers, which we’ll call \( a \), \( b \), \( c \), and \( d \). These are initialized to four fixed constants at the start of hash function.

MD4 uses a Merkle–Damgård construction, which means that the message that we want to hash is first padded to a multiple of a specific block size (16 bytes for MD4). Then, the hash function reads in the message one block at at time and uses the contents of the block to scramble its internal state. The final internal state after reading all the blocks of the message becomes the actual hash.

Several hash functions (including SHA-256) use Merkle-Damgård constructions, so the main thing that differentiates them is how they modify their state for a given message block. MD4’s modification consists of 48 operations split up into 3 rounds. Each of these operations look something like this:

where \(f\) is some non-linear function that is unique to each of the three rounds and \(m[i]\) represents the \(i\)th little-endian 32-bit word of our message block. Each operation updates one of the state variables and the updates cycle between the variables in a regular order (\(a\) then \(d\) then \(c\) then \(b\)). Each round consists of 16 of these operations, each of which mix in a different \(m[i]\) resulting in four updates to each of the state variables per round.

You can stare at the full code below to get a better sense of how it all works:

Essentially, differential cryptanalysis involves carefully examining how minor differences in inputs lead to differences in outputs. What Wang found was that for a certain subset of messages that adhered to a number of constraints, a particular differential resulted in a completely identical output (i.e. a hash collision). Wang called these messages “weak.”

So, what makes a message \(m\) weak? In her paper, Wang listed 121 “constraints” that she claimed were sufficient to ensure that a message was weak. (Later research has shown that 2 additional constraints are actually required for sufficiency). 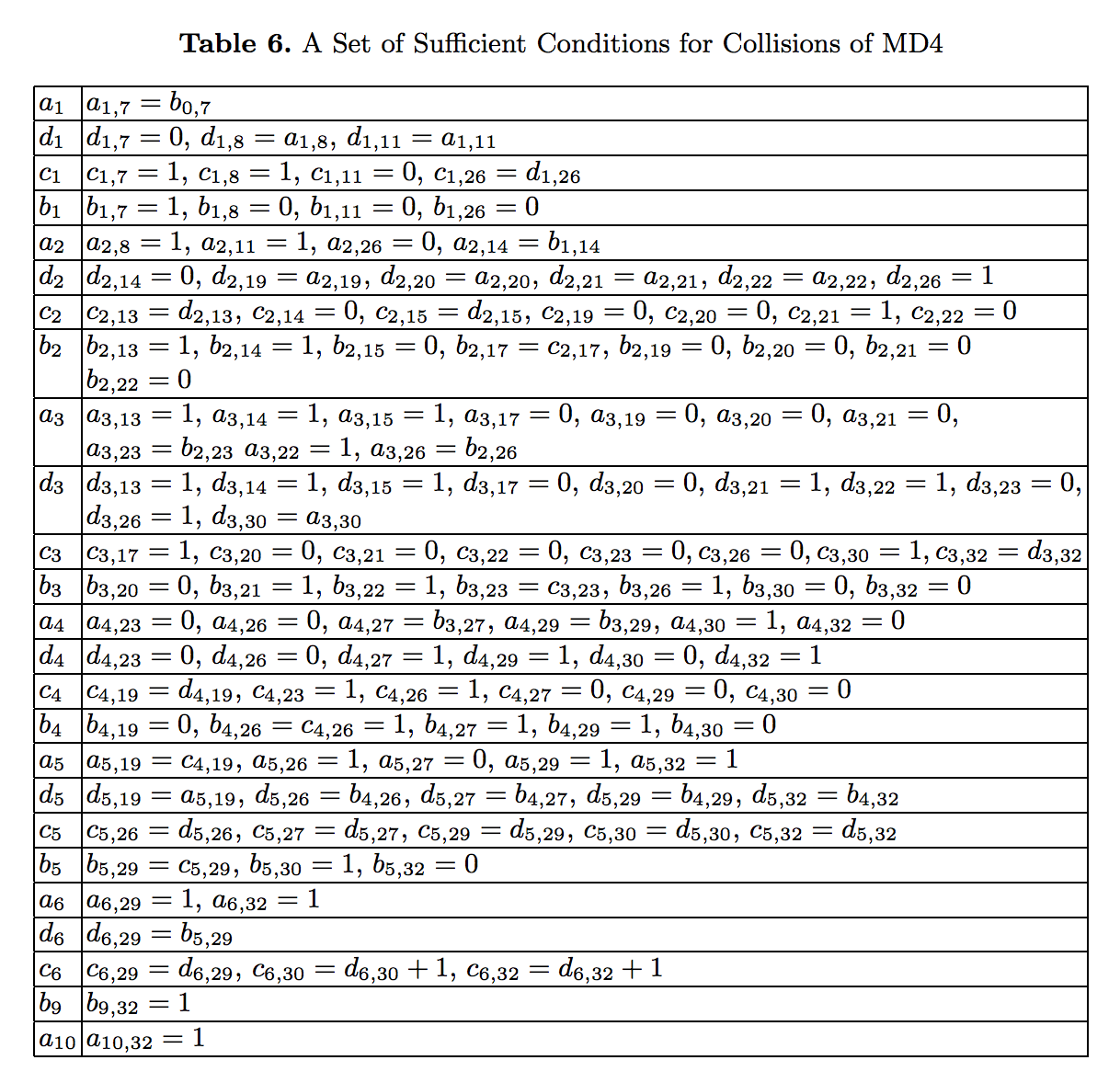 The constraints are (more-or-less) independent of each other, so if you have some way of generating random messages that satisfy \(k\) of the 121 constraints, then on average \(2^{121 - k}\) of the messages you generate should satisfy the rest of the constraints (just by chance) and be weak.

It’s relatively easy to satisfy the first few constraints, but as you go on it becomes harder and harder because with each new constraint you have to ensure that you don’t mess up all of the prior ones. In our attack we satisfied all but 19 of Wang’s constraints and 1 out of the 2 additional constraints listed in the improved attack. This suggests that we need to generate \(2^{20}\) or around 1 million messages to find a collision. This seems to be borne out by experimental results.

But wait: how exactly did Wang produce these 100-odd constraints? Her paper doesn’t say much in this regard and other accounts online indicate that they were produced mostly by staring really hard at MD4.

Implementing Wang's MD4 collision attack... and all the papers I've read say that she found the right difference patterns by "intuition" x.x

We don’t actually need to know how Wang arrived at the right constraints to carry out our attack, but it would be nice to understand this part better. If you have a good explanation, please let me know!

All constraints that deal with updates to state variables made in the first round are pretty straightforward to enforce. This is because each of the 16 first-round updates involves a different \(m[i]\) which means that we can alter each word of \(m[i]\) independently without wrecking the rest of our constraints.

adjust it to meet the constraint:

Several updates have multiple constraints on different bits that need to be enforced. For these, simply compute the new state variable that satisfies all the constraints, and follow the process above to derive the corresponding \(m[i]\).

There are really only 3 different types of constraints, so its helpful to write some helper functions to do most of the heavy lifting:

Then, you can just write down your constraints in an array and have your code run through and enforce all of them.

With just first-round constraints, any randomly generated message can be adjusted to be weak with probability about \(2^{-26}\). This is still too big to make generating collisions super convenient, so we should enforce some second-round constraints to speed up our script.

The first second-round constraint is \(a_{5, 19} = c_{4,19}\). If we just enforce it as we did above we might encounter a problem: in the process of enforcing it we’ll have to recompute a value for \(m[0]\), however this new value might mess up our constraints from the very first operation which also involved \(m[0]\).

However, there is another, more subtle problem. When we change \(m[0]\), we’re also retroactively changing the value of \(a_1\), which was involved in the calculations for the 2nd, 3rd, 4th, and 5th operations. This will ruin the rest of our constraints.

Wang’s solution to this involves “multi-step corrections.” The principle is essentially “it’s ok if \(a_1\) changes, but don’t let the changes propagate any further than that”. For each of the four operations that \(a_1\) was involved with, adjust the corresponding \(m[i]\) such that the updated state variable remains the same when the operation is performed with the new value of \(a_1\).

This retroactively changes the value of \(a_1\) to:

from the first update. Now, the second update looks like:

It’s actually not immediately clear that this actually works. Sure, the only thing that has changed is \(a_1\), but \(a_1\) is involved in three constraints. It’s certainly possible that we could have messed these up. It turns out that since the bits of the constraints that \(a_1\) is involved with are far enough away from the bits that we’re flipping to satisfy \(d_5\), we’re fine.

However, this is no longer true for the next set of second-round updates. Although Wang claims that you can use the same technique to enforce these, in practice I found that I could only reliably enforce the last two of them, involving \(d_{5,29}\) and \(d_{5,32}\), without wrecking my constraints for the fifth update. (Wang also claims, confusingly, that it’s important to enforce second-round constraints in bit-order one at a time, but this is also not true.)

Here are a bunch of other things to consider when actually implementing the attack:

On 9/9/17 at 10:29 pm, our script returned its first-ever collision after trying around 2 million random starting messages. This was the collision we generated:

Perhaps right now you’re thinking “So what? it’s just a collision. What really matters is a second pre-image”. First of all, this is definitely not true. There are plenty of applications that rely on the collision resistance of its hash functions. There are even cool cryptographic attacks that involve exploiting the difference in difficulty between finding second pre-images and collisions.

The good news is that cryptographers seem to have finally figured out how to get hash functions right. It used to be that every invented hash function would experience a predictable life-to-death cycle, but so far both the SHA-2 and SHA-3 families look pretty good. Then again, who knows? Maybe a decade from now some college student will be solving cryptopals challenge 107: “SHA-256 Collisions.”

You can read our full attack script here.