This is part 3 of a series of posts about the MIT Mystery Hunt. You can find part 1 and part 2 here.

I’ll use this last post to talk about the events and the final runaround.

First, the events. There were four of them based on Charisma, Constitution, Strength + Dexterity, and Wisdom + Intelligence. The Charisma event was some sort of speed-dating activity, the Constitution event involved massive bobble-heads that were reused from the Crossing the Charles procession, the Strength + Dexterity event was a human-sized crossover between Hungry Hungry Hippos and Bananagrams, and the Wisdom + Intelligence event was a pub quiz with a twist.

Because our team solved all the metas before the last two events were scheduled, we did these as one large group in a private event scheduled by Setec. The pub quiz was interesting enough that I want to describe it in some more detail: In essence, there were some number of rounds each with 4 trivia questions coming from different categories. The questions were not trivial, but they were easy enough that someone was bound to know the answer in a crowd of 60 people. The answers to the first round of questions were (in some order):

(Disclaimer: these definitely were not the exact answers to the first round, but they were all answers for some round and that’s good enough to show what’s going on). After submitting our sheet with these answers, the host read aloud the “correct” answers which were:

Since we got all of them wrong, we earned 0 points, but we quickly figured out what was going on: each of the 4 true answers to the trivia questions needed to be transformed to produce an answer that still belonged to the same category. The four transformations were always:

applied in some order. So, when we determined the answers to the next round:

and got full points. (After we’d received enough points to move on, we tried to solve the remaining rounds by just listening to the category names, and we were fairly successful, getting something like 2 out of the 4 answers right.)

This hunt also had mini-events for each new character we rescued. I didn’t do any of these, but the linguist event in particular looked hilarious.

After we finished all the events, we were directed to the final encounter between our characters and Mystereo. After some puzzling shenanigans culminating in a group hug, we successfully defeated him and were given a cardboard hexagon with runaround instructions directing us to the two-sided die, which we needed to escape from the game world. 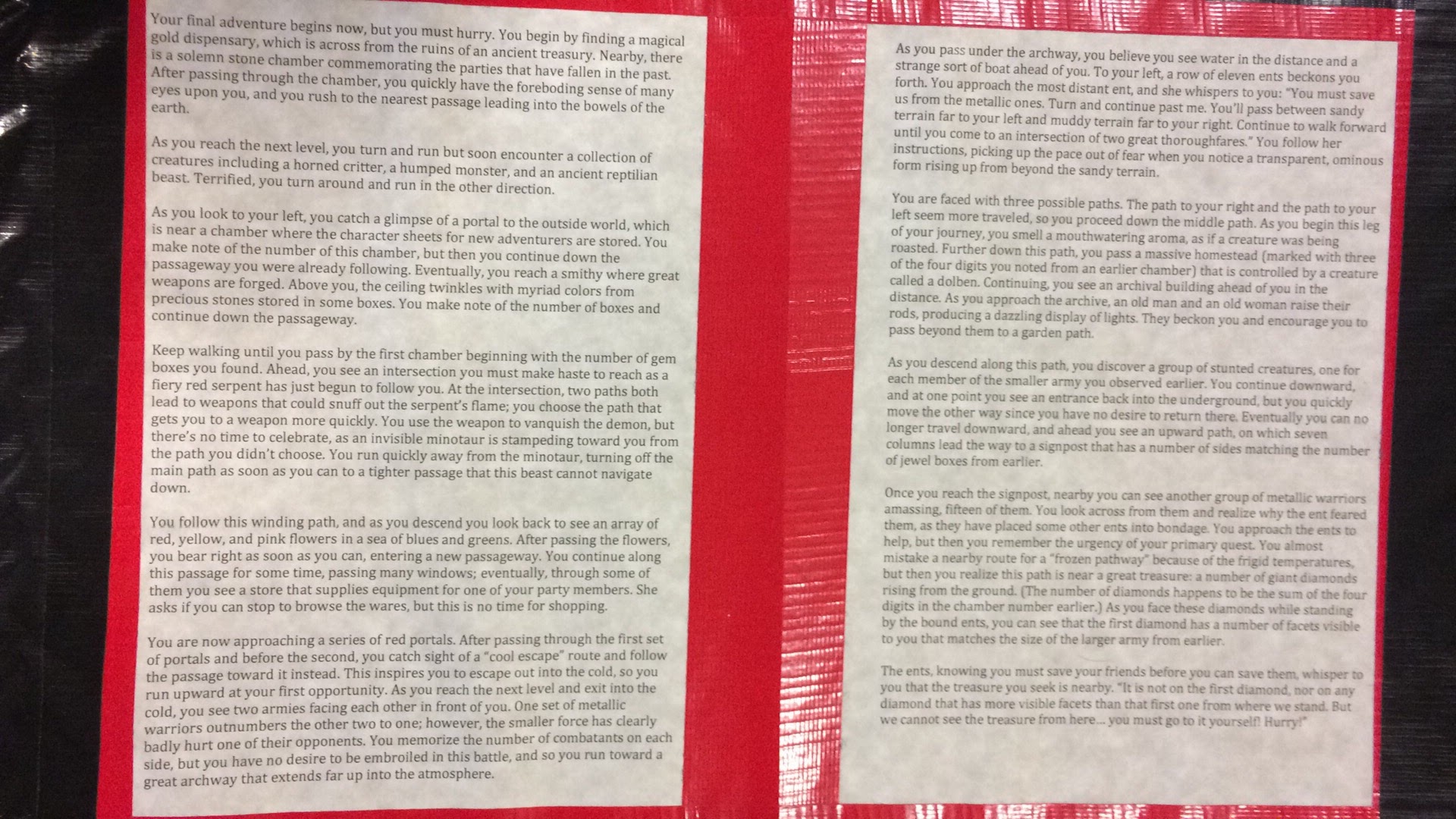 The runaround began in lobby 10 and went east and east and east and east almost to the edge of MIT’s campus. We found the coin next to building E62 by one of the green, diamond-ish sculptures. (Actually we only found a “coin-shaped hole” seeing as Death and Mayhem already took the real coin).

I thought the runaround was a lot of fun and appreciated how it showed off parts of MIT that casual visitors (or even some students) may never have seen before such as the glass-blowing lab, the tunnels, and the far-east campus spaces. It was a fair amount of walking, resulting in the eastern-most coin location in hunt history. (I know this because of a lovely map made by Amy Marcott tracking the coin locations over the years. The map only goes up to the 2013 hunt, so I copied and updated it with the locations of the recent ones. I’ll try to keep this up-to-date in perpetuity, so let me know if you see any errors).

At kickoff, I was initially excited when I learned that Setec had revived the “Oracle” hint-distribution mechanism from the 2015 hunt. If teams acquired enough “gold” from solving quest puzzles, they could ask any yes-or-no question about any regular puzzle. In the 2015 hunt, this was a great way to get unstuck on some very difficult puzzles, and our team had a lot of fun with deciding the best questions to ask. Unfortunately, in this hunt the Oracle wasn’t nearly as useful. Firstly, we only ever accumulated enough gold to ask 3 questions, and secondly, we never actually asked any questions because we never got stuck enough to merit the expense. At wrap-up Setec said that it proved valuable for smaller teams, but it still felt overly-stingy to me: 3 bits of information spent over the course of an entire hunt doesn’t amount to very much.

Finally, let me express some slight regret that there were no t-shirts this year! I was hoping this was going to become an annual thing. Thanks to Setec Astronomy for writing an awesome hunt and congratulations to Death and Mayhem for winning!

See you all next year.